Leeds United have made a formal apology for the actions of Marcelo Bielsa and rebuked their manager, after he admitted having sent a spy to watch Derby County in training before Friday’s Championship meeting between the two clubs.

After his team beat Derby 2-0 to go five points clear at the top of the table, the Argentinian said: “It’s true there was someone from Leeds. The responsibility for this is me.” 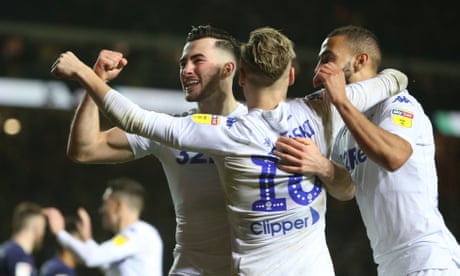 I’d rather not coach than use spy tactics, says Lampard after Derby lose at Leeds

The FA is to investigate the incident after a member of Leeds’s staff was seen acting suspiciously outside Derby’s training ground on Thursday and a club statement, released on Saturday, from the Yorkshire club accepted blame.

It read: “Following comments made by Marcelo Bielsa the club will look to work with our head coach and his staff to remind them of the integrity and honesty which are the foundations that Leeds United is built on.

“Our owner Andrea Radrizzani has met with Derby County’s owner Mel Morris to formally apologise for Marcelo’s actions. We will make no further comment on this matter.”

Frank Lampard, the Derby manager, said after the match at Elland Road: “It’s disrupted our preparations. Police had to come to the training ground, so that was disruptive. We were training on team tactics, shape, personnel and the fact that Harry Wilson wasn’t training.

“He’s admitted it, so I don’t think there’ll be any further action but we had a guy in the bushes before we played Leeds earlier this season and we lost 4-1.”

Ford cost-cutting could lead to 1,000 job losses at Bridgend plant

F.B.I. Opened Inquiry Into Whether Trump Was Secretly Working on Behalf of ...