Ferrari have best chance for years but must give ground on money, says Brawn

The Formula One sporting director, Ross Brawn, believes Ferrari are in the best possible position to challenge for the world championship this season. Brawn said the team had been in disarray last year but had emerged stronger. He also warned that when the new commercial agreement with the teams is made, Ferrari could no longer expect to receive a disproportionate payment from the sport’s revenue as F1 seeks a more equitable distribution of funds. 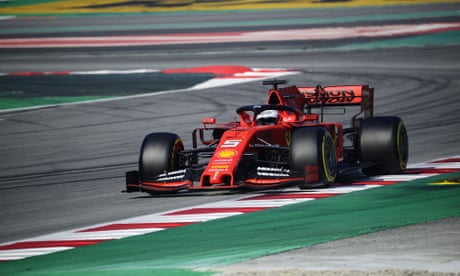 Brawn was the technical director at Ferrari between 1997 and 2006, during which they won six consecutive constructors’ titles and Michael Schumacher won five drivers’ championships. Last season, despite having the best car for some time, a series of errors by the team and Sebastian Vettel cost them dearly. They were also hit by the death of their CEO Sergio Marchionne and there had been tension between the team principal Maurizio Arrivabene and the technical director Mattia Binotto. Arrivabene was replaced by Binotto in January.

“Sebastian is more than capable of winning the world championship,” said Brawn. “With the calmness the team now have, the car looks good; they have every chance this year. The team was in a little bit of disarray last year with Sergio passing away and clearly there was friction in the team between Maurizio and Mattia. It was not an easy environment. If you are going to beat Lewis Hamilton and Mercedes you need to be on top of everything. I feel that this year will be stronger for them.”

Brawn is working on the new technical regulations set for launch in 2021, the same year a new commercial deal with the teams is required. Under the current Concorde Agreement Ferrari receive an estimated $70m payment for taking part, over and above any revenue from where they are classified in the championship. Red Bull and Mercedes also receive substantial additional payments. Other teams have argued that the sport will not be competitive until revenues are more fairly distributed.

Brawn was unequivocal that there would have to be a new deal. “There is too much disparity between the top two or three teams and the rest of the grid,” he said. “You have a group of teams that could finish last and still earn more than the team that has won the world championship. We have to recognise the importance and history of Ferrari and the unique place it has in the sport but we also have to find a balance between that recognition and an equitable position for the rest.