Jürgen Klopp bridled at the suggestion he failed to go for the jugular by not bringing on another attacker in Liverpool’s goalless draw at Everton, adding “it’s not like PlayStation”.

The two dropped points means Manchester City are now outright leaders by a point with nine matches remaining for each side in the Premier League run-in. Klopp’s team have now won only two of their past six league matches. 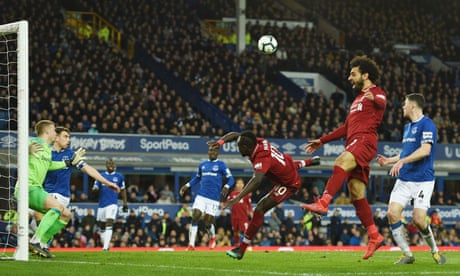 In the second half at Goodison Park the manager brought on two attack-minded players – Roberto Firmino and Adam Lallana – plus a midfielder in James Milner. Asked if he should have gone for the jugular by bringing on three attackers, Klopp made clear his unhappiness with the query.

“Do you think we didn’t take enough risks today? That’s a really disappointing question – do you think it’s PlayStation? Bring an extra attacker, and everything change? Football is not like that. We don’t lose our nerve,” he said.

Klopp added there was no need for a “don’t panic” message to his players. “We are not little boys any more. I believe 100% in our chances,” he said before making a joke about whether there will be more twists and turns in the title race. “At least one,” the manager said.

“But we have Burnley [next] so how can I say about what will happen – that would be disrespectful. I already know what the pundits will say in the studio – situations like today you have to finish it off. 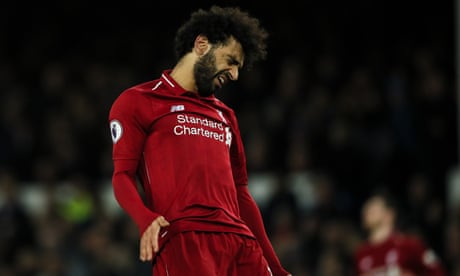 “I’m completely fine with chasing [City]. Who wants to be top of the table at the beginning of March? It is nice but there are lots of games to play. I watched Match of the Day last night and saw the celebrations of Man City, they had 900 chances and scored one goal [in a 1-0 win at Bournemouth], a shot with the wrong foot. You have to be ready for these chances.

“We do not think about City when they are a point behind us, now we are behind them but not too far. They have to win, we have to win and let’s see who wins more at the end.”

Klopp, who laughed off an exchange with an Everton ballboy who appeared to mock him with applause towards the end of the game, also pointed to the weather as having an impact on the contest. “The wind does not help and there was a lot today,” he said.

“You have to be ready for the fight of the second ball. It is OK [the result] – a difficult game for different reasons and a wild opponent. The wind was coming from all directions and did not help anybody.

“Our derbies [against Manchester United and Everton] are over and we play all the others now. It was not a genius game but we got a point against an opponent who is doubly motivated.

“We have to take the situation as it is. We talk about a free-flowing Liverpoolside the other day and now we have Burnley at Anfield. Only 400 yards away from here but a completely different game. We have to show stability and fight for the result.”

Andy Robertson believes the pressure is now on the defending champions. “We become the chasers now and all the pressure is on Manchester City,” said Liverpool’s left-back. “We will fight for every last ball until the whistle is blown at the end of the season. The pressure has been on City because they are expected to retain the title.”

The Everton manager, Marco Silva, was pleased with his side’s efforts. “I’m proud of my players and the desire they showed,” he said. “It felt amazing in our stadium. Our fans were amazing and they pushed the team from the first minute. It was a tough match but a balanced match.

“I told them before the Cardiff game [a 3-0 win last week] that every match has to be a final for us. There are many games to play and many points to win before the end of the season. Nothing is finished for us.”