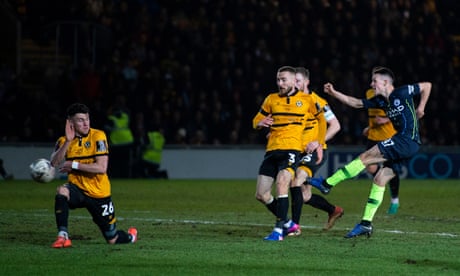 “Phil has to compete with Kevin [De Bruyne], with [Ilkay] Gündogan, with Bernardo Silva, with David Silva, but he’s a player who is ready – ready to play,” Guardiola said.

“And today was a good test for him, with second balls, long balls, he had to adapt. He learned a lot, I’m sure, and he helped us to win the game with two incredible goals. We know that he’s a guy who [gets] close to the box and has this mentality to score goals, and he has the ability to do that. He was brilliant. He was top.”

Although City dominated possession, the scoreline flattered them a little, given that it was 2-1 with only one minute of normal time remaining. Pádraig Amond, capitalising on a mistake by Aymeric Laporte, lobbed Ederson to briefly spark hopes of a Newport fightback, only for Foden and Mahrez to strike again for City.

Guardiola, who picked a strong team, was full of praise for Newport on and off the field. Asked about the atmosphere, the City manager said: “I’m quite surprised. The support of the team was incredible, chanting ‘Who are you?’ was nice. I understand completely why Leicester and Middlesbrough suffer a lot in this stadium. It was tight [tonight] – we scored the third goal just before 90 minutes. But we knew the game would be tight.

“What they do, they do incredibly. They attack the channels with long balls, in the second balls they are physical and strong, every throw-in and free-kick they are always dangerous because they train a lot and do it really well.”