The ex-Boston Red Sox player was shot in the back at an outdoor venue in his hometown, Santo Domingo, on 9 June.

The Dominican Republic's attorney general and national police director said the attackers had intended to kill another man sitting at the same table.

Ortiz, 43, has been recovering at a hospital in Boston.

His wife, Tiffany Ortiz, said in a statement on Tuesday that his condition had been upgraded from "guarded" to "good".

Speaking at a news conference on Wednesday, Attorney General Jean Alain Rodríguez said an investigation had revealed that "the object of the criminal attack on David Ortiz was not him".

Mr Rodríguez and Ney Aldrin Bautista, the head of the national police, said the intended victim was a friend of Ortiz, who they identified as Sixto David Fernández.

They named the man suspected of ordering the attempted murder as Victor Hugo Gomez, a fugitive wanted by US authorities who has connections to Mexico's Gulf Cartel drug gang.

He is believed to have hired the attackers to kill Mr Fernández - who was identified as his cousin - for turning him in to drug investigators in 2011, the officials said.

Eleven arrests have so far been made in connection with the attack, including the alleged gunman, drivers and accomplices, the Associated Press news agency reports. 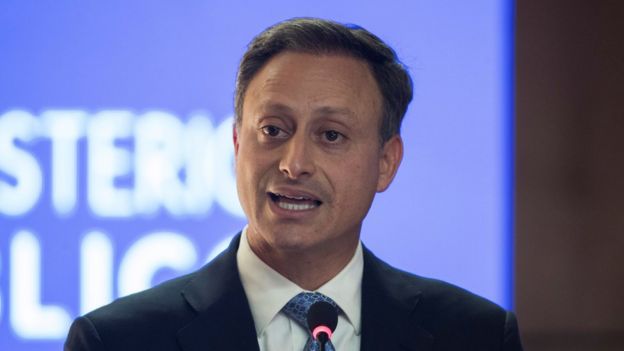 Ortiz, known to fans as "Big Papi", had emergency surgery in the Dominican Republic, where doctors removed his gallbladder and part of his intestine, before he was flown to Boston.

His friend, television host Jhoel Lopez, was wounded in the leg in the shooting.

In a statement shared by the Boston Red Sox on Tuesday, Ortiz's wife thanked fans for their support, which she said had "lifted his spirits tremendously during this challenging time".

Ortiz is a sporting hero in Boston for his role in winning three World Series baseball titles.