Ford cost-cutting could lead to 1,000 job losses at Bridgend plant

Ford is planning to cut more than 1,000 jobs in the UK over two years, with more than half the workforce at its Bridgend plant in south Wales likely to be axed.

Union stewards were briefed on the likely scale of redundancies in the UK on Friday, 24 hours after Ford joined Jaguar Land Rover in giving notice of widespread job losses as part of a complete overhaul of their struggling European operations.

The US carmaker is understood to be planning to cut 1,150 jobs, including 1,000 at its Bridgend engine plant, with the rest falling at its transport division, affecting lorry drivers around the country.

This level of redundancies, divided into two phases ending in 2021, would account for more than half of Bridgend’s 1,950-strong workforce. Fordrefused to confirm the figures and said it was consulting with unions.

Britain’s largest trade union, Unite, vowed to fight against any compulsory redundancies. “It is a devastating blow for our members and their families, as well as having grave implications for the Welsh economy and the supply chain,” said Des Quinn, Unite’s national officer for the automotive industry.

“There are a number of factors behind this grim news – the main ones being challenging market conditions for carmakers generally, a lack of a coherent industrial strategy from the UK government and the uncertainty created by Brexit.

“Over the last two decades the UK car industry has experienced a renaissance of which we can all be proud of.

“The challenge for government, the carmakers and the unions in the near future is to fight very hard to maintain the environment that made that success possible,” Quinn said.

Jo Stevens, the Labour MP for Cardiff Central, said Ford’s decision was “awful news for Bridgend and the whole of south Wales”.

Ford is overhauling its European operations in an attempt to increase profit margins, including the shutting down of loss-making vehicle lines.

It is to abandon the multivan market – vehicles with more than five seats – stop manufacturing automatic transmissions in Bordeaux from August, review its operations in Russia and combine the headquarters of Ford UK and Ford Credit to a site in Dunton, Essex.

“We are taking decisive action to transform the Ford business in Europe,” said Steven Armstrong, Ford’s group vice-president and president of its Europe, Middle East and Africa region.

“We will invest in the vehicles, services, segments and markets that best support a long-term sustainably profitable business, creating value for all our stakeholders and delivering emotive vehicles to our customers.” 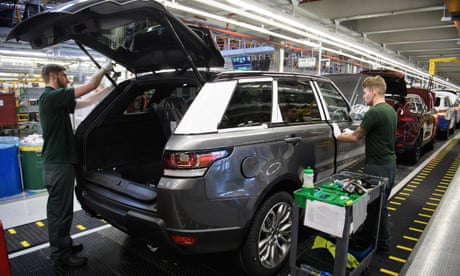 Details of large-scale job cuts at Ford follow hard on the heels of Jaguar Land Rover’s announcement that it plans to reduce its workforce by 4,500, the majority via voluntary redundancies in UK management roles at sites including Coventry and Gaydon in Warwickshire.

JLR has suffered because of falling Chinese demand and a fall-off in diesel sales after the Dieselgate emissions-testing scandal, which has led several cities and countries to impose punitive taxes on cars powered by the fuel.

Ford and JLR have also warned that the longer-term future for the British car industry remains uncertain because of Brexit. The Japanese carmaker Honda said on Thursday that it would shut down its Swindon factory for six days in April, following the planned Brexit departure date on 29 March.