Blast from the past: Wellington drivers beep horns to dispel ghostly tunnel vision

It won’t make any lists of the world’s spookiest places, though it is arguably one of the noisiest. Inside the bare, concrete tunnel that takes Wellington’s commuters into the city centre, a path is littered with abandoned rental scooters and the air is thick with exhaust fumes and the deafening, incessant honking of car horns.

But the tradition of motorists beeping their horns as they drive through the Mount Victoria tunnel has become a city-wide superstition – and has also proved divisive. Many residents believe a jaunty toot – or, for some, blasting their horns for the tunnel’s entire 623-metre length – either wards off evil spirits, or acknowledges the memory of a teenage girl who was murdered and her body buried at the site a year before the tunnel was opened in 1931.

Others think the sound is obnoxious. In January, Chris Calvi-Freeman, a then-Wellington city councillor, suggested signs should be placed on either side of the tunnel advising motorists not to sound their horns to avoid annoying pedestrians, who have to share the passage. The councillor’s attempted honking ban (which has so far proved unsuccessful) sparked a backlash, with one Wellingtonian attempting to organise local drivers into a world record attempt for tunnel tooting (also, so far, without success).

“I hate it when I’m walking through,” said Saxon Bruce, who was skateboarding to work down the tunnel’s pedestrian path on Thursday, armed with noise-cancelling headphones. “But every time I’m driving through, I always toot because it’s so fun.” 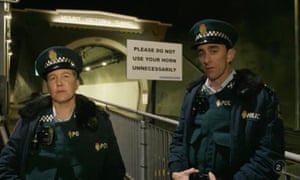 The etiquette of tunnel tooting and the story behind it has spawned depictions in popular culture; August saw the publication of a historical novel about the murdered teenager, and on Thursday, motorists’ honking was the subject of Wellington Paranormal – a television mockumentary series created by Taika Waititi and Flight of the Conchords’ Jemaine Clement about police officers investigating supernatural crime.

In the latest instalment, the efforts of two hapless officers to prevent motorists tooting their horns inadvertently unleash a vengeful spirit of a constable who had died there years earlier.

The story is far-fetched – but based on a real-life tragedy. Phyllis Avis Symons, 17, was pregnant when she was killed and her body left in soil at the tunnel’s earthworks site in 1930. According to research by the Mount Victoria Historical Society, there was evidence Symons was buried while still alive. Her boyfriend, George Errol Coats, was later hanged for her murder.

Coats, 29, was a widower and father of six who had previously worked on the tunnel’s construction.

The memory of Symons is supposedly what inspired the tooting tradition, although Joanna Newman, the historical society’s convenor, said there was no proof of that.

James Gilberd, a Wellington man who investigates paranormal events with the New Zealand Strange Occurrences Society, said the Wellington Paranormal episode was likely to revive interest in the Symons story. He had never conducted an investigation of the Mount Victoria tunnel because the heavy traffic would make it unsafe, he said, but he doubted one would be fruitful.

“So far on when everything’s different, there’s hardly likely to be any resonance or echo or remnant of the event,” he said. “All that we know is that it was at the south end of the tunnel, and it’s kind of spooky going in that end because you’re always in the shade when you drive in.”

He doesn’t toot, he said. It irritates him.