Bake Off is broken – here's how to fix it

If Bake Off was ever supposed to sour, it wasn’t supposed to happen in 2019. It was meant to happen when it controversially moved to Channel 4 three years ago, not when we were all collectively distracted by Henry’s snazzy ties or Helena’s obsession with the undead. But this year has seen the cake contest become decidedly overbaked, and it’s not just one thing that’s gone wrong: it’s everything. Search for #GBBO on Twitter and you’ll be faced with thousands of tweets of irritation rather than admiration. While we haven’t gone off Bake Off entirely, the show seems to have forgotten what made it so compelling in the first place, fuelled by stress, tears and some near-impossible challenges. Bake Off 2019 has, frankly, forgotten how to be Bake Off. So, if you’re reading Channel 4, here’s how to fix it.

Number one: get more older bakers in the mix. There was nothing wrong with this year’s contestants, but what usually sets Bake Off apart are the people you never normally see on reality TV: the Vals, the Flos, the Terrys. I didn’t think it mattered at first, but in hindsight it shifted the entire atmosphere in the tent, and left older viewers without a representative, unless you count Henry and his prematurely-aged ways.

Next, make the technical challenges vaguely recognisable. Two years ago, contestants were making mini rolls and molten chocolate puddings. This year: Maids of Honour, Sicilian cassatelles and Gâteau Saint Honorés. Paul Hollywood and Prue Leith’s reasoning is that standards have risen, but we have all witnessed the weekly montages of bewildered faces and total confusion. At times, it has felt like we were one week away from Prue demanding they whip up something she thought of in a dream. 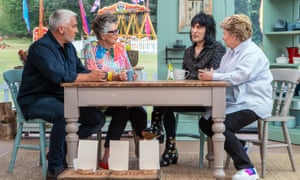 The cruelty hasn’t ramped up over time; it came out of nowhere this year. Photograph: Mark Bourdillon/Channel 4

Third? Turn down the heat. The allure of Bake Off has always been the illusion that it is a quaint little show, when actually it is an anxiety-driven thrill ride watching people lose it while trying to add a marzipan layer to their Battenburg. This series, however, bakers have been reduced to tears four times during a technical, including in the final, where Steph and Alice both buckled under the pressure. Noel’s whispers of reassurance and Sandi’s hugs have gone from rarities to weekly occurrences. In other reality shows this kind of thing would be normal. Here, it is crushing.

But Bake Off’s biggest issue, and the one that really takes the biscuit, is the judging. The cruelty hasn’t ramped up over time; it came out of nowhere this year. Prue slated everyone’s vertical pie showstoppers in one fell swoop: Sandi called the pies a “visual feast” and Prue replied “unfortunately that’s where it stopped.” Then she attacked beloved goth Helena with the barb: “If you shut your eyes, it’s a nice sponge cake.” And of course there was Paul “jokingly” storming out of the tent because he thought the technicals were awful, and going to town on Priya repeatedly, accusing her of “boiling” her custard and calling her meringue “horrible”. He also reeled off a non-stop list of failures to an already deflated Michael over his cheesecake surprise – “It droops, half of it is missing, it’s cracked down the middle, the icing looks terrible.”

All of this harshness, plus Paul’s propensity to stand silently, aggressively beside bakers not answering their questions, no matter how many times they ask for help, makes the atmosphere in the tent all the more uncomfortable. It seems Bake Off is losing the very things that made it so special in the first place – its gentleness, and the sense that nothing could ever go too wrong. Now, not even Henry’s incredible tie collection could make everything OK.