Future shock: why Years and Years is 2019's most terrifying TV show

With the finale of Years and Years approaching, how might the story end? Will Viv Rook, the populist prime minister of 2029, succeed in disappearing every refugee and member of the working class? Will radical activist Edith Lyons stop Rook in her tracks, succumb to radiation poisoning, or do both at the same time? Will Edith’s no-good brother Stephen discover a conscience, or at least get some colour in his cheeks? And as for Stephen’s daughter, Bethany, whose brain has been plugged into the internet by the Home Office; will her Three-Eyed Raven-style powers solve the problems of humanity, or at least help us switch energy providers?

We soon shall see. A six-part drama by Russell T Davies, Years and Years is a bold mashup of at least three different genres – kitchen sink drama, near future sci-fi and state-of-the-nation polemic – and it has juggled the requirements of each form effectively. You care about the characters, believe in the futuristic inventions (such as “the blink”, a stick that disrupts wireless communications) and recognise the political tensions that pit parts of the Lyons family against each other. Furthermore, it’s all done with a lightness of touch that stops you from dwelling too long on any less convincing aspects (why did Daniel get on that boat?).

As you might expect, coming as it does from one of Britain’s best creators, Years and Years has been good TV. But its most powerful quality is not one you would necessarily shout about on a billboard. What this serial has managed consistently is to create a sense of dread; one that burrows its way under your skin and stays there, pulsing away day and night.

Years and Years starts today, in 2019, and speeds through the upcoming decade and a half with things falling apart as it goes. This pacing is the first thing that contributes towards the tension; there are few if any scenes in which an awful event or its consequences are not being felt. You don’t get much time to relax. 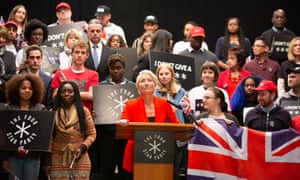 It also helps that the material for this dystopia is so close at hand. Most obviously, there is the ascent of Rook, a leader not far removed from Nigel Farage (they share a hairstyle), but whose common touch incorporates a very British diffidence and a willingness to act silly, to turn a political event into something more like a wedding speech. Rook, as played by Emma Thompson, convinces as the next possible mutation in our febrile politics.

It also feels highly plausible that, 10 years down the line, climate change will have reduced the UK to one big soggy mess. In the 2028 of Years and Years, the country endures 60, no 80, consecutive days of rain. We are informed of this development by the standard alternate reality device of a news broadcast within the show. But we also learn of awful news through incidental dialogue between characters. We hear that chocolate has become a luxury and that there is no longer such a thing as a banana. The offhand way this information is shared only adds to the unease as the viewer notes the gap between the way the characters are behaving and the significance of what is happening to them.

There’s also the experience of having to watch the characters act against their own best interests. The youngest Lyons sibling, Rosie, is hard up and in a wheelchair thanks to spina bifida, but also becomes Rook’s most ardent fan. As the final episode begins, however, she is imprisoned in her estate, a victim of Rook’s social and ethnic cleansing.

So many of the little fearful aspects of Years and Years ring true. They come together to form something persistent in the pit of your stomach. The most unsettling thing of all is the one that might also give you hope. It’s the fact that, despite everything that happens to them, the Lyons family just carries on. At one point, for example, Stephen loses his high-paying job in a banking crash and becomes a member of the benighted gig economy. He has to maintain as many as eight jobs, most of which involve riding a bike, but at the end of the day he still has time to betray his family by having an affair with a colleague. The ability to remain focused on our own little worlds is equal parts reassuring – we cannot be destroyed! – and depressing – we’re just like cockroaches!

Davies came up with the idea for Years and Years some time ago and he says he has had the final scene in his head for 25 years. If that’s the case, the chance of it providing a happy ending against all the odds seems slim. It remains likely that some, if not most, of the eerie forecasts contained within this drama will never happen. Rather than disappearing beneath the waves, the UK may yet build a new Jerusalem. But if the worst does happen, Years and Years will have served as good preparation. That sinking feeling will at least not come as a surprise.