Originally, I was going to interview Bill Callahan at home in Austin, Texas. Then he was going to fly to London for a more efficient European press trip. Then his publicist forwarded an email from the 53-year-old songwriter: “Every round-trip flight from New York to London melts 32 sq ft of polar ice ... in light of global warming, any chance this could be done via FaceTime? These empires must crumble!”

Reading about Extinction Rebellion strengthened Callahan’s decision, he says, when we speak by phone, along with hearing a friend cite that chilling statistic. Still, he will keep touring. “Performing music is worth melting the ice caps,” he says, with a chuckle that clicks like a latch closing.

Since his 2005 album A River Ain’t Too Much to Love – his last as Smog, the name he made music under since 1990 – nature has taken root in Callahan’s songs. Birds, horses, rivers and cattle populate his lyrics, telegraphing chaos, stubbornness, peace, and above all, an embrace of intuition. Less dissonant than his Smog work, this openhearted evolution – his tender songs elevated by laconic profundity – has affirmed him as one of the US’s greatest songwriters.

Yet Callahan’s beautiful new album, Shepherd in a Sheepskin Vest, is altogether more domestic, revealing his unexpected new life as a husband and father. “I never thought I’d make it this far,” he sings on What Comes After Certainty. He had never understood the point of marriage or kids. Then he fell in love with Hanly Banks after she made a documentary about him. “It was like: ‘Oh, here’s my wife! And probably the mother of my child.’ It was in her face, her aura. And there was no fear or doubt about it.” On Callahan’s 2013 album Dream River, he used the metaphor of flight to immortalise the awe of romantic contentment: “I never like to land / Getting back up seems impossibly grand / We do it with ease,” he sang on Small Plane.

After his son’s birth, Callahan thought he might drop music to become a full-time dad. His wife talked him out of it, but he struggled to start his next album. “Giving birth nearly killed me / Some say I died”, he sings on Son of the Sea, in that suave, mystic deadpan. He chuckles again. “It was kinda the death of Music Bill for a while, but he was resuscitated.” As his son grew, Callahan eked out time to write, but nothing happened, even as he exercised, meditated and read to stoke the muse. “I was trying to be Superman,” he says. Then he remembered the importance of idleness: “On your list of things to do, you don’t write: ‘Daydream’.”

Once he cracked it, he started writing with arresting candour for a man who has often been described as intimidating, or, he laments, “fiercely private”. Although more effusive now, he remains a careful conversationalist, approaching sentences like a man negotiating a treacherous slope. “Sky change the sea,” he sings on The Beast. “Love changed me.” How? “Well!” That latch click again: “I understand community now.” To avoid small talk, he says, he would only “run to the car when my neighbour wasn’t outside. Now I’ll go and say hi. I realised how we’re all linked. I always felt the link from art and having friends but that’s as far as it went. It made me part of the world outside of myself.” Callahan credits his wife – now a therapist – with helping him to open up. “She says honesty is the most interesting thing.” Previously, Callahan believed the opposite, plus he wanted to protect his intimates. “And I wanted people to listen unbiased. If someone tells you: ‘My wife just got hit by a car and died, here’s my song about that’, then you’re probably gonna cry no matter how not-good it is. But if you just hear a song, Here’s a Song About My Wife Getting Hit By a Car and Dying, it has to be good or people aren’t gonna listen.” 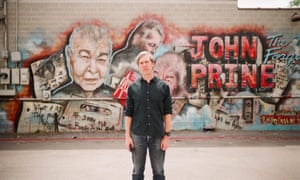 ‘I was trying to be Superman’ … Callahan. Photograph: Publicity Image

He admits to indulging the myth of the tortured artist in his 20s, even though he wasn’t tortured at all. “Music was everything to me, and that in itself is kind of a torture,” he says. Callahan released Smog’s debut album, Sewn to the Sky, in 1990. By halfway through the decade, melody was squeezing the rancour out of his early material; by 2001, he reached a purple patch, writing classics such as Dress Sexy at My Funeral, and admitting, on Held, “For the first time in my life / I let myself be held / Like a big old baby”.

By 2005, Callahan was reborn. “I’m new here,” he sang on a song later covered by Gil Scott-Heron. “Will you show me around?” His droll writing reached towards nature, gratitude and other replenishing forces, yet was never saccharine or preachy. Here was a man who, you believed, had figured things out – with help from the dub icon and personal hero Lee “Scratch” Perry. “I read this quote where he said: ‘I wanna make superhero music. My music is for the good, it vanquishes evil.’ I was like: ‘Yeah, let’s make music that is full of goodness.’”

He found the transition easy. “If I have a superpower – heh! – it is that I am very flexible. I am constantly absorbing new ways of looking at life but still maintaining the seeds of who I am. I hunger for being proven wrong or directed in a different way.” Searching for goodness, he says, is simple. “In your daily life, you can focus on the person who cuts you off in traffic, or you can focus on how beautiful the blue sky is when the person cuts you off in traffic. Everything was there before us and we choose what to focus on.”

The new album’s Morning Is My Godmother expands this Zen outlook, extolling sunrise as a rejuvenating force. “The sun is a drug that your tolerance never builds up for,” he says. He stresses that he is not “gazing out my eastern window with a cup of chai – I’ve got shit to do”. And his sunrise soundtrack is as likely to be nihilistic SoundCloud rap (“I can’t stop looking through that window”) as Terry Riley. “But the fact that morning bothered to come imbues me with the energy to get the day rolling. Every day is a new day and I feel this sense of protection in the mornings, and potential.” He exhales: “Loving, I guess.”

The outlook has more practical applications. His mother died of cancer in May 2018. Callahan says her passing strengthened the peace with which he had written about death in the intervening decade. He saw every stage of her illness, and they spent her last week together. “To watch someone die is awful but beautiful,” he says.

He likens it to his wife giving birth: “I felt I was at a gate where life is becoming death and death is becoming life.” On the new album’s 747, he returns to flight to distil these moments of mundanity meeting profundity. “That feeling on the airplane when the sun is coming through the windows; that’s the closest thing I could relate it to, in my past experience,” he says.

The contentment on Shepherd in a Sheepskin Vest is understated yet overwhelming. Does Callahan worry that the more he has to live for, the more he has to lose? Sometimes, he says, and then he reaches for a transcendent feeling that he hasn’t figured out how to express yet. “I can’t die,” he says. “Life is too good. It can’t end. I don’t mean that I don’t wanna leave these people or these places. It’s hard to explain.” What he means, he thinks, is that you can confront death by giving up or by working towards it. “As long as you keep doing that work, then death makes sense and is a relief.”

I fumble for a theory: perhaps the reason listeners have perceived him as intimidating is because his recent work – not least Shepherd in a Sheepskin Vest – has felt so connected to some greater truth that it is hard to countenance the idea that he is subject to the same impulses as the rest of us; that perhaps all enlightenment takes is for us to stop resisting. “Hmm!” he says. “Well, that’s a very interesting and nice thing to say. I hope people can let themselves be happy.” And he chuckles, and makes you believe it’s that easy.