Feminists with a bullet: how the ageing heroine became screen gold

As a greying Linda Hamilton dusts off the rocket launcher to take on a new Terminator, we look at how the cowering victims of 70s horror paved the way for today’s grizzled gunslingers

The trailer for Terminator: Dark Fate hinges on the return of Linda Hamilton’s Sarah Connor to the franchise. Halfway into it, she steps from an SUV with not one but two guns so big that the trailer slips into slow-mo in sheer awe. “Who are you?” another character gasps.

Sixty-two year old women don’t usually get to be action stars. It’s common for guys like Clint Eastwood, Bruce Willis, Harrison Ford and Arnold Schwarzenegger to tote firearms and perform stunts into their 50s, 60s, even 70s. But women in action films are typically younger than their co-stars, often by decades. In last year’s Mission: Impossible – Fallout, Tom Cruise was 55; female lead Rebecca Ferguson was 35.

Hamilton’s star turn in Dark Fate is the latest sign, though, that things may be starting to change. Jamie Lee Curtis, who is 60, starred in a reboot of Halloween last year. Sandra Bullock, who played the lead in the Netflix hit Bird Box, is 54. Trevante Rhodes, who played her boyfriend, is only 29. 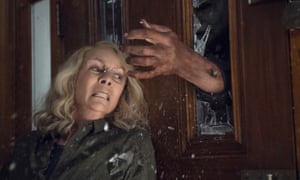 Older female stars are finally getting big action roles because younger women started to get them 30 or 40 years ago. Halloween in 1978 and Terminator in 1984 were part of a wave of movies in which women heroes got to do what male heroes had so often done before: pick up guns and blast away.

Yet those early films came out of a tradition that was not exactly feminist in intention. Halloween and Terminator were variations on the slasher genre made famous by Alfred Hitchcock’s Psycho in 1960. Part of Psycho’s horror was based in a misogynist fear of gender confusion: the villain in the movie is a mentally disturbed man who dresses up as his own mother. Picking up on those themes, the suspense film Deliverance (1972) – a huge influence on later slashers – depicted a male rape. The slasher was a genre in which horror cut people loose from gender; much of the disgust, the terror, and the enjoyment was in the way that fear made men into women and women into men.

John Carpenter’s Halloween extended the gender play by making its protagonist, Laurie Strode, a tomboyish high-school student. Laurie is first pursued by killer Michael Myers in typical stalking fashion, but eventually she turns the tables, picking up the phallic knife and becoming the attacker. Laurie is the protoype of what Carol Clover called the “final girl”: the last character alive in a slasher – almost always a woman – who claims the role of violent victor.

The final girl gradually moved into the mainstream with characters like Sigourney Weaver’s Ripley in Alien (1979) and Sarah Connor in Terminator (1984), two sci-fi-inflected slashers. That helped pave the way for more straightforward action movie heroines, often with more explicit feminist messaging, as in the recent Wonder Woman and Captain Marvel films.

The success of those early slashers also created the opportunity for their stars to take up their roles again for sequels. Hamilton returning to play Connor again, or Curtis playing Laurie, is an event, just like Schwarzenegger reprising his turn as the Terminator or Harrison Ford coming back as Han Solo. The success of the earlier films mean their stars are still beloved and bankable. 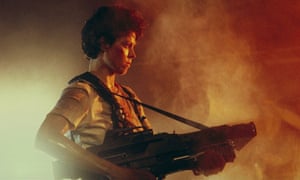 As the Halloween reboot showed, slasher tropes work just as well with older actresses in the main role – if not better. The Final Girl is all about reversing power dynamics. The horror of the pursuit is greater because women are figured as weak and helpless, and the conclusion is more exciting because of the rush of the power reversal. Older women set up an even more visceral victory. Laurie by the end of the 2018 Halloween becomes more mythic even than Michael Myers. The seesaw excitement of disempowerment/empowerment is part of why Bird Box, a movie about a mature who has to blindfold herself to fight mysterious assailants, captured the imagination.

The creators of the early slasher films certainly weren’t trying to expand roles for older women in Hollywood. But pushing against stereotypes can have unexpected benefits. Because of choices some film-makers and actors made three decades ago, it now seems natural to watch a 60-year-old woman lock horns with a killer robot. When you start telling different stories with different heroes, you don’t know where you’ll end up, or who will get to hold the rocket launcher.