Shares rose 12% after the company confirmed the preliminary approach on Monday.

The move could pave the way for the break up of the 178-year old company, which is looking to sell off its airline business.

Thomas Cook's confirmation of the Club Med owner's approach comes after Sky News' report over the weekend that Fosun was in secret talks to buy the UK tour operator.

The firm, which is listed in Hong Kong, is already ‎Thomas Cook's biggest shareholder with an 18% stake.

Thomas Cook said in a statement: "There can be no certainty that this approach will result in a formal offer.

"However, the board will consider any potential offer alongside the other strategic options that it has, with the aim of maximising value for all its stakeholders."

If Thomas Cook was to accept an offer and sell to Fosun, the move would rank among the most significant and prominent acquisitions of a British business by a Chinese rival to date.

Thomas Cook and Fosun already have a joint venture in China which is showing strong growth, with an eight-fold increase in customers last year.

The introduction of own-brand resorts in the world's second-largest economy has also opened up the domestic Chinese market to Thomas Cook. 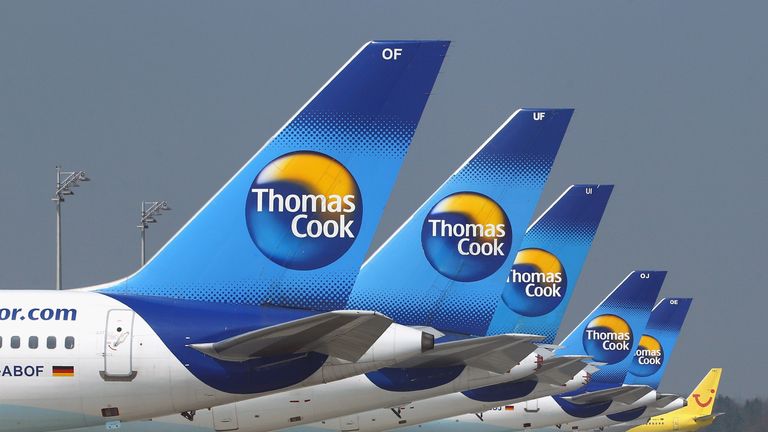 Thomas Cook is looking to sell off its airline business

However, any deal agreed between the two companies would be complicated by separate interest from private equity firm Triton, wanting to acquire Thomas Cook's airline and tour operating assets in northern Europe - as revealed by Sky News in May.

The bulk of the loss for the six months to the end of March was caused by Thomas Cook's decision to write down the value of part of the business by £1.1bn in the light of the weak trading environment.