A gunman killed 12 people and injured at least four others in a Virginia municipal building, in the latest deadly mass shooting to roil the United States.

Four police officers responded to the scene and “engaged” in a “longterm gun battle” with the suspect, who was armed with a 45 caliber handgun with extended magazines and a sound suppressor, police said.

The suspect was a longtime employee of the public utilities department, according to authorities. He died at the scene. Police have identified the suspect but have not yet released his name to the public because they have not yet notified his family.

James Cerveram, the chief of the Virginia Beach police, told reporters: “This is a devastating incident which is going to change the lives of a number of families from our city.” 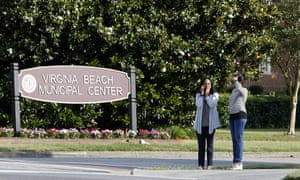 Outside the entrance to the Virginia Beach Municipal Center following the shooting. Photograph: Kaitlin McKeown/AP

Victims were found on all three floors of the building, as well as one victim who was shot and killed in a vehicle before the victim entered the building. Six victims were transported to hospitals, including one officer who was saved by his bullet proof vest, Cervera said. One victim died en route to the hospital, and four were still in surgery on Friday evening. There may be additional casualties who “self-transported” to the hospital, police said.

As many as 400 people work in the municipal building on any given day. Cervera emphasized that the crime scene is “most horrific” and “can best be described as a war zone”.

Survivors recounted scenes of pandemonium and fear that erupted as gunshots rang out and workers scurried frantically for cover.

“We just heard people yelling and screaming to get down,” Megan Banton, a public utilities worker, told television station WAVY-TV, saying that she and co-workers barricaded themselves in their office.

“We put the desk up against the door because we didn’t know if they were coming in. We were just hoping that it would be over soon, and then we heard the cops yelling up the steps.”

Barbara Henley, a Virginia Beach councilwoman, arrived at the building around 4pm Friday and saw a crowd of people standing outside.

“Somebody told me there had been a shooting and they were told to leave. Afterward, I heard a loud male voice say, ‘Get down!’ so I did,” Henley told the Associated Press.

“I’m just sick,” she added. “All these people that I work with all the time. They are such really fine people, and I just hope they’re all safe.”

The FBI, Department of Homeland Security, and the Virginia state police are assisting with the investigation. 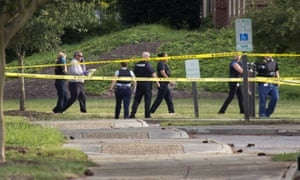 The shooting sent shockwaves through Virginia Beach, the state’s largest city and a popular vacation spot in south-eastern Virginia situated on the Atlantic coast at the mouth of the Chesapeake Bay.

The building where the attack took place is in a suburban complex miles away from the high-rise hotels along the beach and the downtown business area.

“This is the most devastating day in the history of Virginia Beach,” Mayor Bobby Dyer said. “People involved are our friends, coworkers, neighbors and colleagues,” he added.

“This day will not define Virginia Beach. We will determine going forward today how we respond to our city,” said Aaron Rouse, a city councilman. “We will come together and we will show the strength of our city.

“This is just a horrific day,” Northam said. “A lot of people are on the scene, and our thoughts are with victims and families. We are working with law enforcement and first responders to make sure we are taking care of everyone right now.”